Many of us are getting ready for the Holiday season around our homes, and many are heading to Disneyland to experience Christmas time at the resort! I have never been for Christmas, but it is on my bucket list! While there, you might be looking for ways to avoid the crowds, and one way is to take advantage of the mobile ordering service available at many restaurants around the resort!

Disneyland implemented mobile ordering back in late 2018, so if you haven't been this year, this system may be new to you! We tried this out for the first time back in May, and it really made for a smooth dining experience. Last week we talked about how the Disneyland app turns your phone into your FASTPASS, PhotoPass, and park ticket. This week we will talk about how the app also turns your phone into your restaurant menu!

The Disneyland mobile ordering works like a good majority of other online/mobile ordering apps out there (Subway, McDonald's, etc.), and it all works through the Disneyland app! To get to mobile ordering, push the + button at the bottom of the screen and select "Order Food". You first find a restaurant (such as the Pacific Wharf Cafe, one of my favorite places to eat in California Adventure), and then select the time you plan to arrive.

You can also order food by selecting the restaurant on the map and clicking "Order Food". This is a quick and simple way if you know exactly what restaurant you want to eat at!

Once you select your arrival time, the menu for your chosen restaurant will pop up! I chose my the Broccoli and Cheese Soup in a Bread Bowl, which is my favorite item at the Pacific Wharf Cafe! One thing I really like about the mobile ordering at Disneyland is that you don't have to worry about your food sitting on a counter getting cold if you get stuck on a ride when your pick-up time hits. Once you are ready to pick up your food, press the "I'm Here, Prepare My Order" button, and they will start preparing your food so it is nice and fresh once you show up! (This is a lot like Chick-Fil-A's system, if you have ever ordered through their app.)

Now here is a tip that we picked up from the Window to the Magic Podcast: instead of pushing the "I'm Here" button when you actually show up, press it when you start heading towards the restaurant. If you do this, you will be able to pick up your food closer to when you arrive, rather than waiting for them to finish preparing it after you show up. Ordering on the app was awesome at the Pacific Wharf because instead of standing in line, we had some time to find a table while we waited for our food, which can be quite a challenge during the lunch rush!

Once your food is ready, you'll get a notification from the app! You also pay from the app, so all I had to do was go in and grab my food once it was ready. It was so simple. We will definitely be using this system again!

You can also make dining reservations through the app as well. Just select "Reserve Dining" from the + menu at the bottom of the app. You will then put in the amount of people in your party and select the date. You can then search restaurants by the time you want to eat. You can also reserve dining by clicking on the restaurant on the map and selecting "Reserve Dining" from that page. Once you book your reservation, you will receive a confirmation email and the reservation time will be added to your schedule in the app, which you can find by pressing the menu button on the bottom right of the screen and clicking on "My Plans".

We loved this ordering system because it meant that we didn't end up standing around in long lines for food - as if we didn't do that enough all day for rides! Instead, we could just park it at a table somewhere and wait to be notified that we could go pick up our food. Now not every restaurant has mobile ordering, but many of the quick service restaurants are currently using the system. All restaurants that take reservations are available on the app.

We have really loved that everything is moving over to the digital world. Gone are the days of trying to organize all of the FASTPASSES, park tickets, reservation times, food orders, maps, wait times, etc. Utilizing Disneyland's app to its full extent is the perfect way of combining Disneyland's grab-it-as-you-go paper system & Disney World's everything-is-planned-out Magic Band system. The only thing I would add is the ability to scan a phone at ride photo locations (rather than type the photo code in the PhotoPass section of the app) or have the option for location tracking, the way Disney World does with their Magic Band for ride photos & videos! That was extremely cool. (If you missed my Disney World Trip Review, you can read that here.)


What has your experience been with mobile ordering at the resort, or using the Disneyland app in general? Let us know in a comment below!

As always, if you have any tips, tricks or questions you would like to submit to our blog feel free to send us an email at enchantedpumpkinblog@gmail.com! And don't forget to follow us by hitting "Subscribe" at the top of the page!

Popular posts from this blog 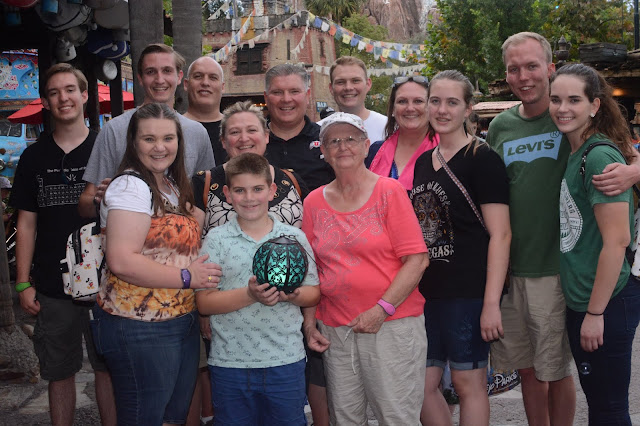 2018 brought a lot of wonderful experiences and also added a lot to my plate! Unfortunately that meant that my Etsy shop and this blog had to be sidelined for a bit. However, today I am back to bring you a huge post I have been working to get out, which will be the first of many posts I have lined up for you guys! Thank you for your patience & support!

(Also just as a quick announcement: We will be making a trip to the one and only DISNEYLAND here in a few weeks!! I will be posting a trip review of that trip as well - and you won't have to wait as long as you did for this one! Also be sure to follow us over at Facebook, because we will be posting live periodically from the park!)


So just as a re-cap, we returned in October of 2018 from a wonderful 9-day vacation to the Disney World Resort in Florida! We spent two days each at the Magic Kingdom, Epcot, Hollywood Studios, and Animal Kingdom and part of our last day…
Read more

MaxPass at the Disneyland Resort

This week our blog returns to the Happiest Place on Earth!

In May, we visited DISNEYLAND right before the opening of Galaxy's Edge! We were hoping to enjoy the last little bit of off-season crowd levels before the expected heavy crowds hit, but when we got there we found that everyone else was thinking the same thing! The parks were a bit more crowded than we had expected for late-April/early-May, and once Galaxy's Edge opened up, the crowds were reportedly non-existent! The crowd levels prior to Galaxy's Edge actually surprised me given the fact that the weather was quite chilly. This was also the first time we had been to the parks since MaxPass was released, so we took this opportunity to give it a try! Without further ado, here are our thoughts on using MaxPass at the Disneyland Resort, and hopefully this will help you determine if MaxPass is right for you!

When MaxPass was first rolled out, it cost $10 per person, per day. This year, they upped the price to…
Read more